Think of the SlideSnap Strip as a semi-automatic, dedicated film copy stage. It is a specialized tool and it is important that you understand how it does and does not operate.

Scanning is quick to master and while it requires full operator attention, it’s easy to establish a rhythm of only a few seconds per scan.

Read more about why we opted for semi-autonomous operation.

The Strip is forgiving of warped / damaged film within reason. Severely curved and rigid films may be problematic to feed / hold flat. This can result in focus issues. We include a magnetic attachment for the guide that will help flatten stubborn 35mm film.

Insert film at the in-feed (curving away from you) and it will be automatically fed in at to first frame for the camera. A jog button is used for adjusting the frame to perfect center (Operator always has final say in frame position as the machine does not attempt to read frame bars and has no way of knowing if the frame is centered).

Efficient batch cropping in post requires a fixed position crop rectangle. This rectangle should allow for a margin of operator framing error.

Negatives can be run through our post processing script to generate a positive image. This can be a separate step, or setup to process automatically. You can also use your own preferred software to invert the images (Negative Lab Pro is a popular alternative.)

While its highly diffuse backlight reduces the presence of dust, the Strip does not feature any sort of ICE or dust and scratch removal. Best practice is to mitigate dust at the film level before capturing.

All film types are scanned in this way. See below for film specifics.

We’ve gone to great lengths to support 110 scanning. However, due to its minuscule dimensions, the drive belt and film guide obscure the image area somewhat. If you absolutely must capture more image area than the Strip allows natively, we also include a 35mm adapter as an alternative which allows 100% crop captures of 110 at the expense of a small increase in handling time.

Loading single 110 frames is possible, but may require use of a tweezers to reach the feeder’s pinch area. 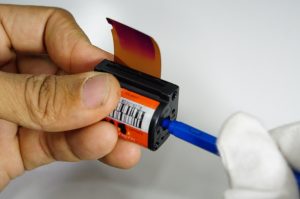 When scanning APS on the Strip, you won’t need to cut it from the cartridge. You simply use the supplied APS tool to unspool the film with the cartridge still attached.

Use the opposite end of the same APS tool to rewind the film.

APS metadata is not read or modified. 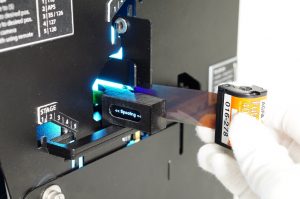 35mm and 126 film are the same width and therefore use the same Stage and Guide positions. 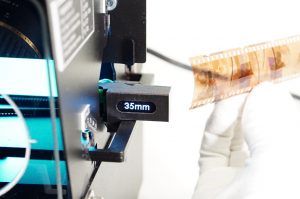 Depending on your camera / lens setup 6×7 frames may require limited cropping in the width (i.e with shorter focal lengths).

Standard photography rolls (i.e 36 frames or less) are supported out of the box.

The SlideSnap Strip is not designed for use with long roll film. (i.e movies)

This approach leverages human diligence over failure prone sensor based automation. Detecting frame registration across the entire range of film types, frame sizes and scene exposures is a very difficult task for a machine and more likely to result in poor effectiveness and frustration.

While the machine makes short work of holding and transporting the film, it leverages the human’s effortless ability to quickly detect and correct for mis-registration.To make the feedback loop as quick as possible, the automatic advance function uses a “dead man’s switch” which allows the human to take over in an instant by simply letting go of a button.

Any negatives of requiring operator involvement should quickly be outweighed by the resulting increase in performance and flexibility when compared to any competing products that promise greater automation.